True style doesn’t try too hard. That was the statement at Paris Fashion Week, alarmingly simple, but proved in a number of ready-to-wear presentations which heralded a move towards clean, simplified elegance.

Celine designer Phoebe Philo – at the top of her game – produced a chic display, effortlessly. Three years after the lauded Briton’s Celine debut, she delivered a strong show, which evoked her boho-bourgeois style in soft silhouettes with subtle architecture.

Another of Paris’ influential designers, Riccardo Tisci of Givenchy, presented a new vision of style Sunday. Again, Tisci channelled a clean look, simplifying the house silhouette in a less elaborate yet sophisticated collection.

Hermes – the house of the jet-setting fashion buyer – served up the elegance in its usual cocktail of travel, silk, leather and exotic cultural references.

Spring is about gentle contradictions, not colour, Phoebe Philo seemed to say: Shown through a muted palette of black, white, navy and grey. 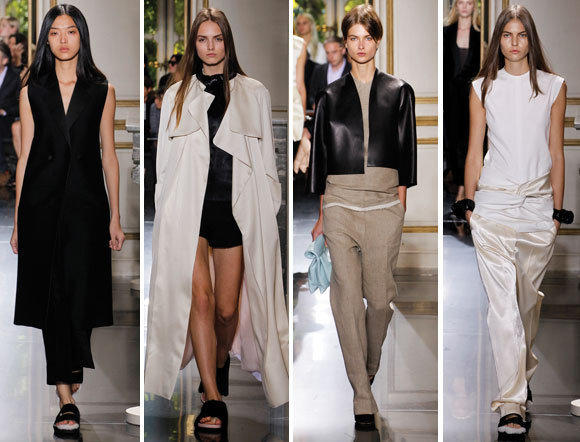 The real point of the show was the gentle play on contrasting lines, then textures, then form. Loosely hanging silhouettes – often with attention to neck details in high necks, bands and twists – came in column or boxy shapes, with a couple of black A-line tuxedo-dresses for good measure. The gloss of sheeny silks whispered a contrast against matte fabric.

Philo has often been noted for her chic “utilitarian tailoring,” which she delivers with uncanny ease. Here we saw it used artistically in hemline frays which turned into tassels, and twisted fabric that wrapped round the back sewn crudely together in a lump.

It’s a style that wouldn’t look out of place on Juliette Binoche, for example, who accepted a best-actress award at Cannes in 2010 in custom Celine.

The house is right in fancying themselves as Paris calendar’s arty side. When fashion insiders asked to see the mandatory program notes, there were wry smiles as they were handed a text-free book of collage pictures. 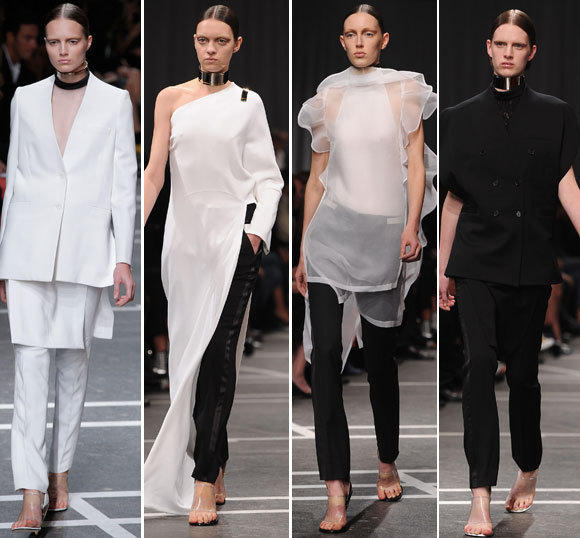 He simplified the silhouette to a more flattened and spread out front-and-shoulder emphasis in 37 black, white and grey looks. A strong voice in the fashion conversation, Tisci’s tailoring influences designers far and wide.

Last spring, for instance, he brought back the peplum. Now, hardly a collection goes by without one cropping up.

The wilder bondage-gear touches that added spice to last season’s equestrian-inspired trip, were gone here, in a less elaborate display – but which had its moments of clean elegance.

A great feature was the clean, descending ripples in many of the looks which are sure to spread into other collections like wildfire. But for a designer who likes to live dangerously, this more saleable collection – though a departure from last season – felt at times like he was playing-it-safe.

The fashion crowd got their summer holidays early – flown first class across a vibrant mix of Polynesian prints and colour-rich baroque foulard motifs. Several of the models carried hang luggage. The mascot of the house, after all, is an airborne messenger.

The looks stopped off at every fabric under the sun: in full grain leather woven in silk, washed silk twill, plunged lambskin, satin piping and lovely indigo denim linen. Colours too, were diverse in cappuccino, terracotta, sulphur, emerald, cobalt and, the palette’s most beautiful, celadon.

The flight this season stopped off at the Netherlands and Germany with tinges of the geometry and graphics of 1930s.

“I’m a modernist at heart,” Lemaire said following the show, hosted next to Paris’ Tuileries gardens.

This idea was worked into the collection’s best looks with a feel of famed Dutch painter Piet Mondrian – who used geometric shapes and blocks of colours that could be seen in several of the final looks. Printed geometric floaty silk blouses and slightly jarring assorted pants made bold statements.

They also featured the slight play on masculine styles that Lemaire likes to toy with periodically: A cotton wool cravat appeared on most of the looks as a man’s tie, tucked into a hoop.

The result was pure luxury, air delivered as only Hermes can.

Kenzo headed back to the Southeast Asian jungle Sunday in a vibrant, fun collection that picked up their last menswear theme: A rainforest trek. 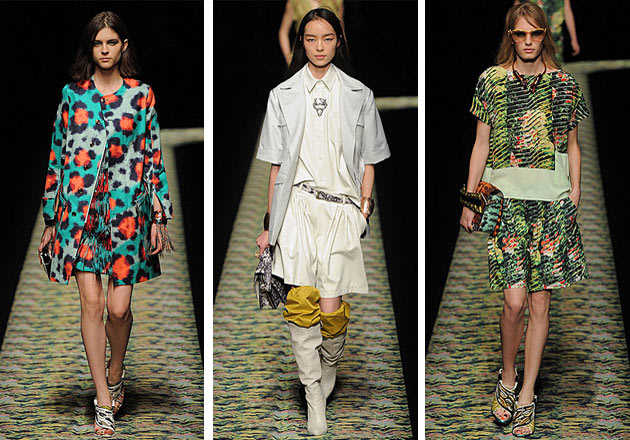 After just one year at the helm, the hard work of designers Humberto Leon and Carol Lim has paid off: They’ve managed to re-stamp the brand with a cool, populist edge. But they’re serious about their work in other ways too: Fashion insiders had to live the catwalk theme, literally, by trekking to the far-flung venue, the Maison de Judo, on the Paris city limits.

In bold – sometimes purposefully garish – orange vermilions and greens, the collection threw up some great wide pants and boxy-shaped jackets as well as a lot of safari-style street wear. Though some of the jungle printed ensembles looked overly busy, a beautiful camouflage print made up for it with images of flowers that looked like leopard.

But there was art in the detail too, with the designers showing a flair for tailoring in great utilitarian features.

Luxola Is Now Shipping To Malaysia, Thailand, Indonesia and Brunei

Luxola Is Now Shipping To Malaysia, Thailand, Indonesia and Brunei

Meet Barun Gonghak, A Sportswear Apparel Brand That Seeks To Improve Your Health

Skechers x Hello Kitty Collection is Purrrfect for All The Cute & Sporty Vibes!

Our Lust-Have: The 3-in-1 Louis Vuitton Kirigami Pochette