A clinically depressed woman in Singapore was rescued by police hours after she began tweeting she was ready to commit suicide on Twitter.

The 32-year-old woman, Elaine Chiam, suffers from major depressive order, a unipolar low-mood syndrome involving low self-esteem and the loss of interest or pleasure in enjoyable activity. She went on to describe how she should be buried and who her material possessions should go to. Her tweets immediately sparked alarm among her over 700 followers, with many asking her to seek help.

Yahoo! Singapore understands that Chiam was due to see her psychiatrist at 5:15pm later on Tuesday but got drunk, sparking the torrent of suicidal tweets. Police arrived at her HDB flat in Ubi Avenue 1 shortly after 430pm. Singapore Civil Defence Force officers were also called to the scene after she failed to respond to friends who had gathered outside her flat.

According to one of her friends who communicated with Yahoo! Singapore, Chiam was found barely conscious and is now being treated at Changi General Hospital. This is not the first time she’s cried out for help. 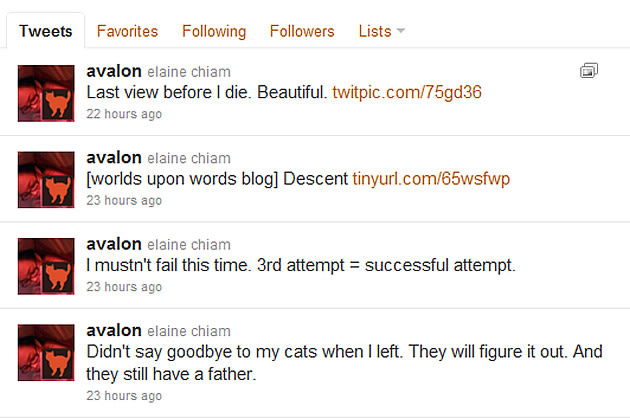 Last year in October, Chiam was rescued from another suicide attempt at Changi Beach after sending out a series of tweets describing her struggle with a “suicidal desire”. She referred to the rescue last year when she tweeted on Tuesday, “twitter. pls.stop rescuing me. i really wan to die. i never meant for anyone to read what i type.”

She also mentioned suicidal thoughts and her clinical depression on her blog, where she wrote bleak poetry and hinted at abusing medication prescribed for her condition.

Rather than a means to seek attention, Yahoo! understands that her tweets are used as a support network for her to alert her circle of friends whenever she feels depressed.

Dont be a Victim of Date Rape Drugs

How Does Vitamin E Benefit Our Skin?