How to (Grow to) Love a Small Penis

I still remember the first time I saw a small penis. It was one of my boyfriends in the past. Admittedly, in my head I had already imagined him to be very well hung, because of his height and exceptionally big feet. So when the time came for the big reveal, I was brutally shocked. And to be honest, very disappointed to find that he was much smaller than average. I’m pretty sure I’m not the only girl who has ever felt this way.

So let me share with you my tips on how to enjoy a small penis.

Firstly, hide your disappointment. Please don’t even think of mentioning to your boyfriend that his penis is smaller than average. There’s no need to tell him because I am pretty sure he knows. Imagine if you wore a push up bra on a date, your guy thought your boobs were bigger with all that padding.

Then, you take your bra off before sex and he thinks whoa, they sure are a lot smaller than I imagined…. I wonder how I can tell her that her boobs are small? You would think he was an asshole, right? So don’t be that kind of asshole.

A great determinant of whether you will enjoy sex or not, is your state of mind. If you’re put off, or have it in your head that a small penis a deal breaker for you, then make up some kind excuse and leave.

A small penis can also be a plus because you can experiment with different positions without feeling like he’s bruising your cervix. You might also find than a man with a small penis is more eager to please, tries harder in bed and has honed his oral pleasuring skills to near perfection. Some people call it over-compensation…. I say, it’s better than no compensation.

When making love, try the V formation. Start in the missionary position. You lie on your back, while he lifts your legs in the air, holds your ankles, and spread your legs apart, forming a V, and then inserts his penis in you. This is a deep penetrating position and should allow him to hit your G-spot.

Another position to try would be with him sitting on the edge of the bed, with his legs spread open. You assume a position like you’re going to sit on him, like on a chair. Support yourself by placing your hands on his thighs and lower your bottom down onto him. As he penetrates you, the key is to keep your thighs very close together.

Concentrate on squeezing your thighs together as you move up and down. You can also tell him to squeeze your butt cheeks together. What you’re trying to create is a tighter, more restricted passage for his penis. Alternatively, instead of performing an in-out motion during sex, have him grind against you.

Most women orgasm from clitoral stimulation, so if he rubs against you enough, the size of his penis shouldn’t matter. You could also get him to stimulate your clitoris with his fingers while having sex.

If penetration is still not working out well for you, all is not lost. There’s always oral sex. His tongue can really do a good job. If you want your partner to give you more oral sex then make him feel he’s already incredible at it. Any time he does it right, pile on the praise. Send him a sexy email or text, recounting the last time he licked you the right way. Keep it simple: “I can’t stop thinking about how amazing your tongue feels down there.” You can be sure he’ll be eager to get right to it as soon as possible. 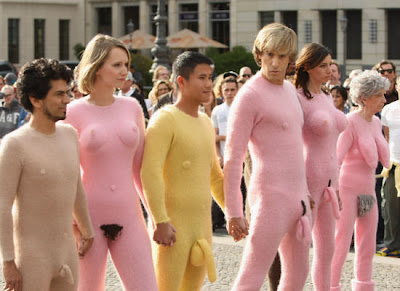 So you see, having a man with a smaller than average penis is not a big deal. If he’s a great guy then his penis is only a fraction of the equation, no pun intended.

P/S- now go do your kegels!