Beach Holiday, Here I Come! Thanks to Coolsculpting with Halley Body Slimming Clinic

I was one of those tanned beach babe wannabe once upon a time.

The pristine beach was covered with powdered white sand. Colourful towels ornamented the sun-bleached landscape. Tanned bodies in fancy bikinis, strutting along the edge of the water or lying in the scorching hot sun with a pair of sunglasses. I was one of those tanned beach babe wannabes once upon a time. When I was in my twenties, hanging out at the beaches of Sentosa every weekend was the coolest thing to do. While I didn’t exactly have washboard abs back then, I was definitely on the slim side. 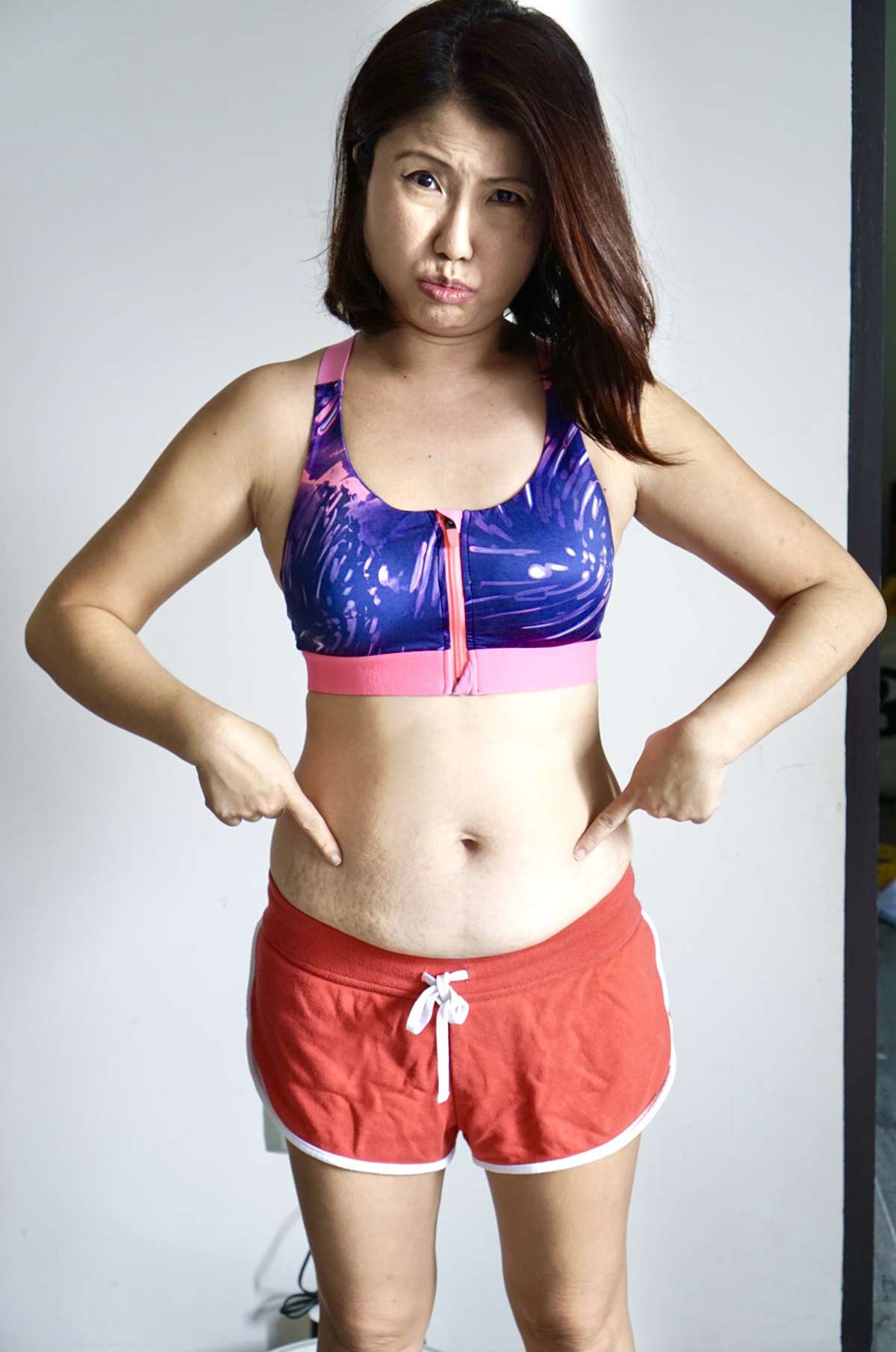 Fast forward 20 years later, after giving birth to 2 lovely children, I still harbour the thought of being a beach babe but the obstruction is big. With childbirth, motherhood, and of course, age, my tummy was screaming the word FAT. The flabby lump together with my loose skin after childbirth was quite a scary sight. I was very conscious each time I put on my bikini, so much so that I retreated into wearing a one-piece or even my sports shorts when I go swimming. Every weekend, when my children are having their swimming lessons, their father would be the one in the pool with them. They asked me why. It wasn’t that I can’t swim. I can. And am good at it. I was simply a little uncomfortable with that blob.
For years, I tried dieting and exercising but to no avail. Crash diets caused me to have a very bad case of gastritis back then and intense gave me bad knees. So when I heard about CoolSculpting that was offered at Halley Body Slimming Clinic (Halley Body), you can imagine how happy I was! Finally, a non-invasive treatment to get rid of my fats!

CoolSculpting®  is an US FDA-approved, non-invasive treatment that utilises cryolipolysis technology that targets only fat cells. No needles! The frozen and crystallised fat cells are eliminated and the fat cells are gone for good. With this device, the doctor can perform spot reduction and body contouring with the kind of precision that is impossible with any spot toning exercise. Meaning to say, you are able to reduce the fats at your tummy, your arms, your love-handles, your thighs or even your chin! It is very specific. It isn’t a weight loss program which in most cases may not be sustainable should you lead an unhealthy lifestyle. It is a fat reduction procedure which helps you to achieve the contours that you’ve always wanted.

Did you know that at the age of 5, the body stops producing new fat cells? Hence, whatever fat cells you lose during cryolipolysis, you lose them forever! The remaining fat cells merely become bigger or smaller. The actual number of fat cells remain exactly the same. The skin, muscle, connective tissues and nerves are not affected. CoolSculpting reduces up to 25% of fat cells in the treated areas each time. It is really the answer to achieving that hour-glass figure which every girl wants.

My experience with CoolSculpting 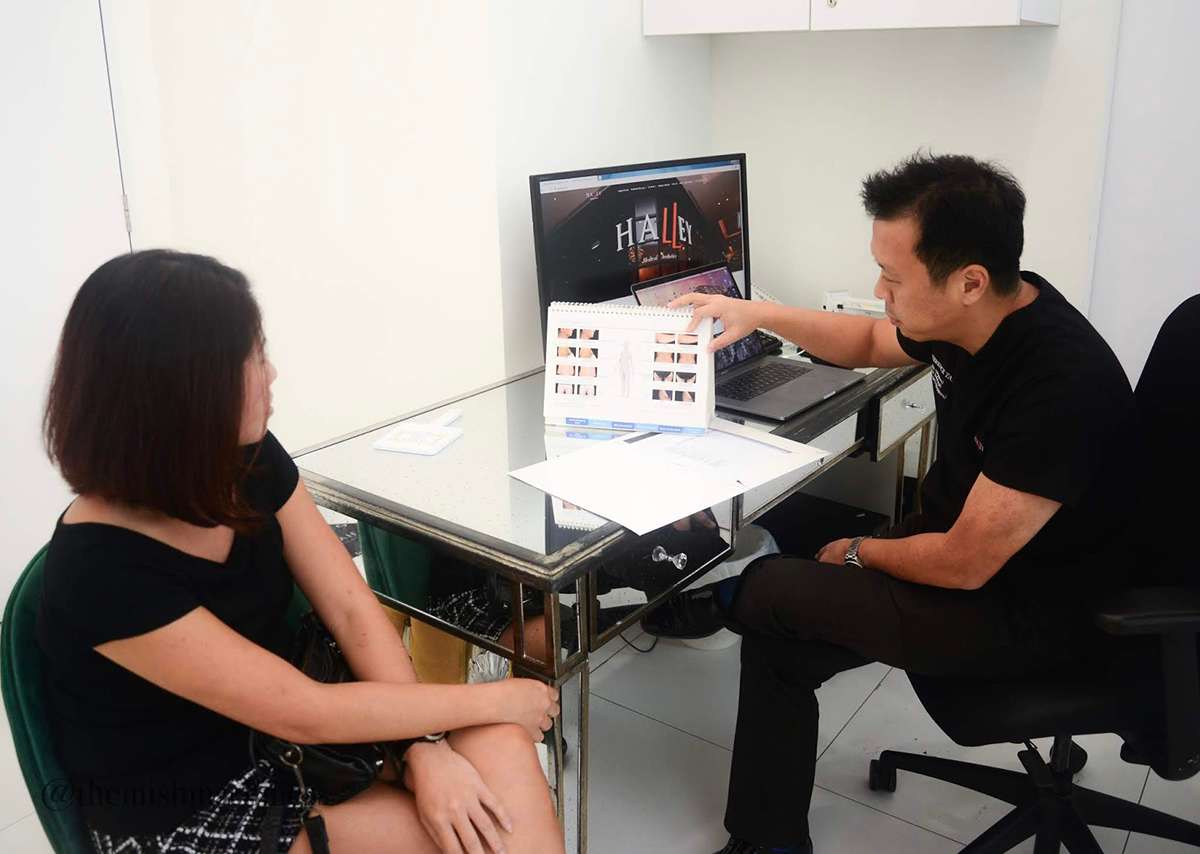 On the day of the consultation, prior to meeting Dr Terence Tan, the Medical Director of Halley Body and its sister clinic for facial aesthetics, Halley Medical Aesthetics, the clinic assistant took my weight, waist measurements and blood pressure. Halley Body specialises in non-invasive no downtime weight management, fat reduction, body firming, and muscle toning treatments. The team at Halley Body had to ascertain if I was a good candidate for the procedure. You see, not everyone is suitable for this procedure. It is best to let the doctor assess your condition and let him prescribe the most suitable fat reduction treatment for you as there are many options available. During the actual consultation with Dr Terence Tan, he asked me several questions which included whether I was on any dieting pills. Dr. Terence Tan prescribed 11 CoolAdvantage and one CoolAdvantage Plus applicators to treat the stubborn fat on my abdomen and flanks. Compared to legacy CoolSculpting applicators, the CoolAdvantage range of applicators reduces treatment time by nearly half depending on the type of applicator used.
For instance, treatment time for the traditional CoolSculpting applicator takes 60 mins but this duration is reduced to 35 mins with the CoolAdvantage applicator. The CoolAdvantage range of applicators also features an enhanced cup design for improved patient comfort as well as a larger cooling area to treat a bigger area. 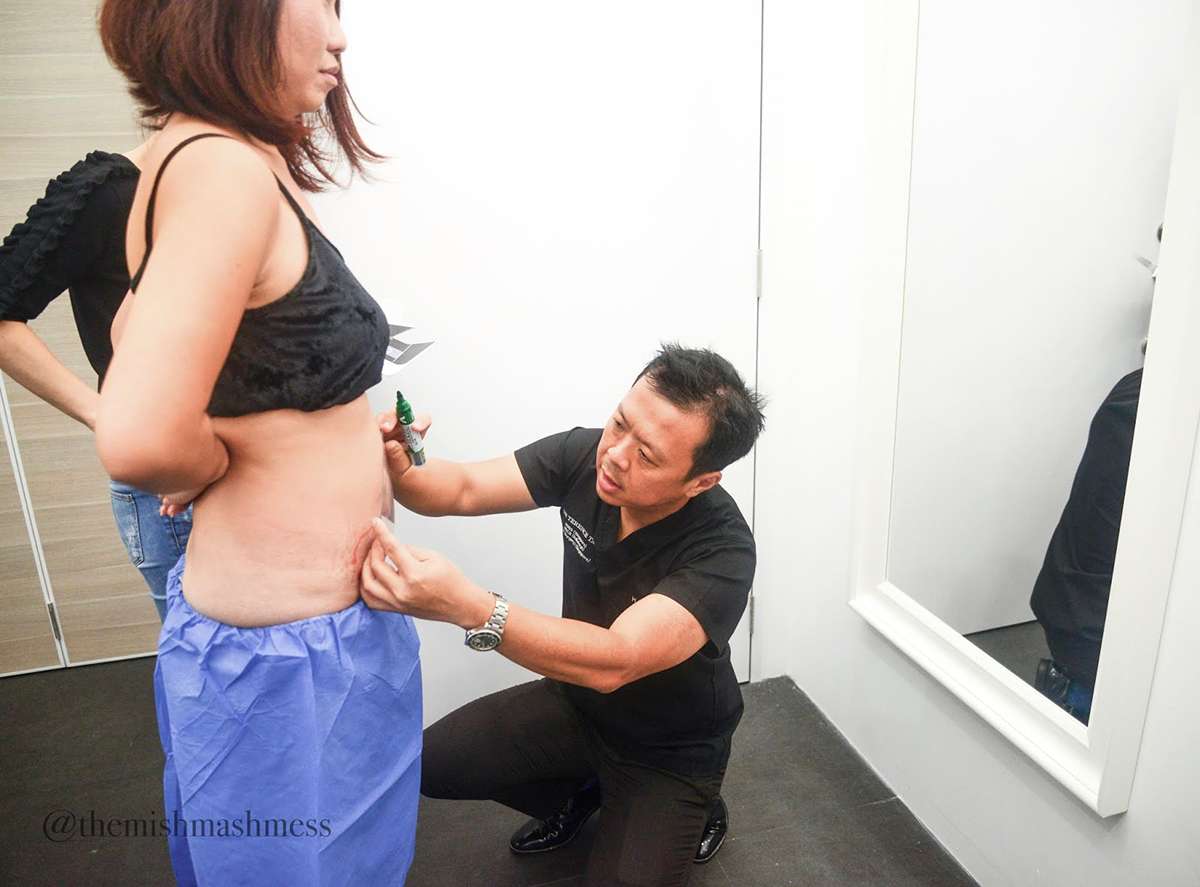 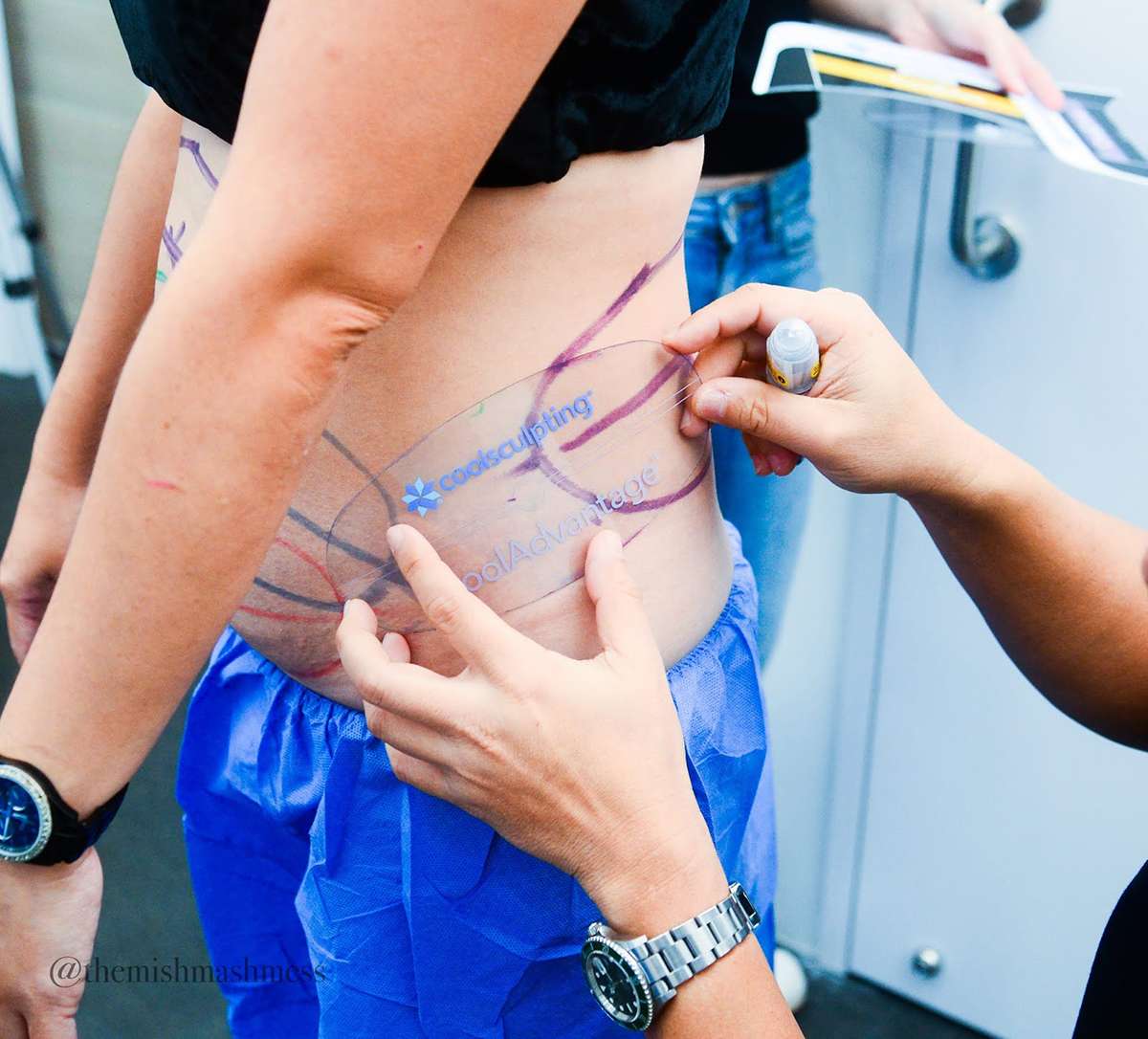 He then proceeded to mark out the various areas which needed attention. He pointed out that it was critical to mark them with different colours to avoid any mistakes made. After the consultation, I was given a form to sign my consent.

I didn’t quite know what to expect. I was only told that each CoolAdvantage applicator would take 35 minutes. In addition, one CoolAdvantage Plus applicator would be used for the biggest area and that would take 45 minutes. Hence with 12 applicators being done, I would need a grand total of 430 minutes which translates to a whopping 7+hours! But of course, you may not require 12 applicators like me. It is a case to case basis and the number of applicators and sessions required by each individual is different. But we were all out to kill those stubborn fats, hence 12 was my magic number. I was armed with my battery pack, my snacks and a book. I even told myself this was the perfect time to do nothing but sleep! I was looking forward to it.
Step 1:
I put on a dress on that day as I read that while there wasn’t going to be any downtime, except that the treated area may swell a little. Hence, a loose dress would be ideal. I was given an outfit to change into. It consisted of a spaghetti top and baggy pants. 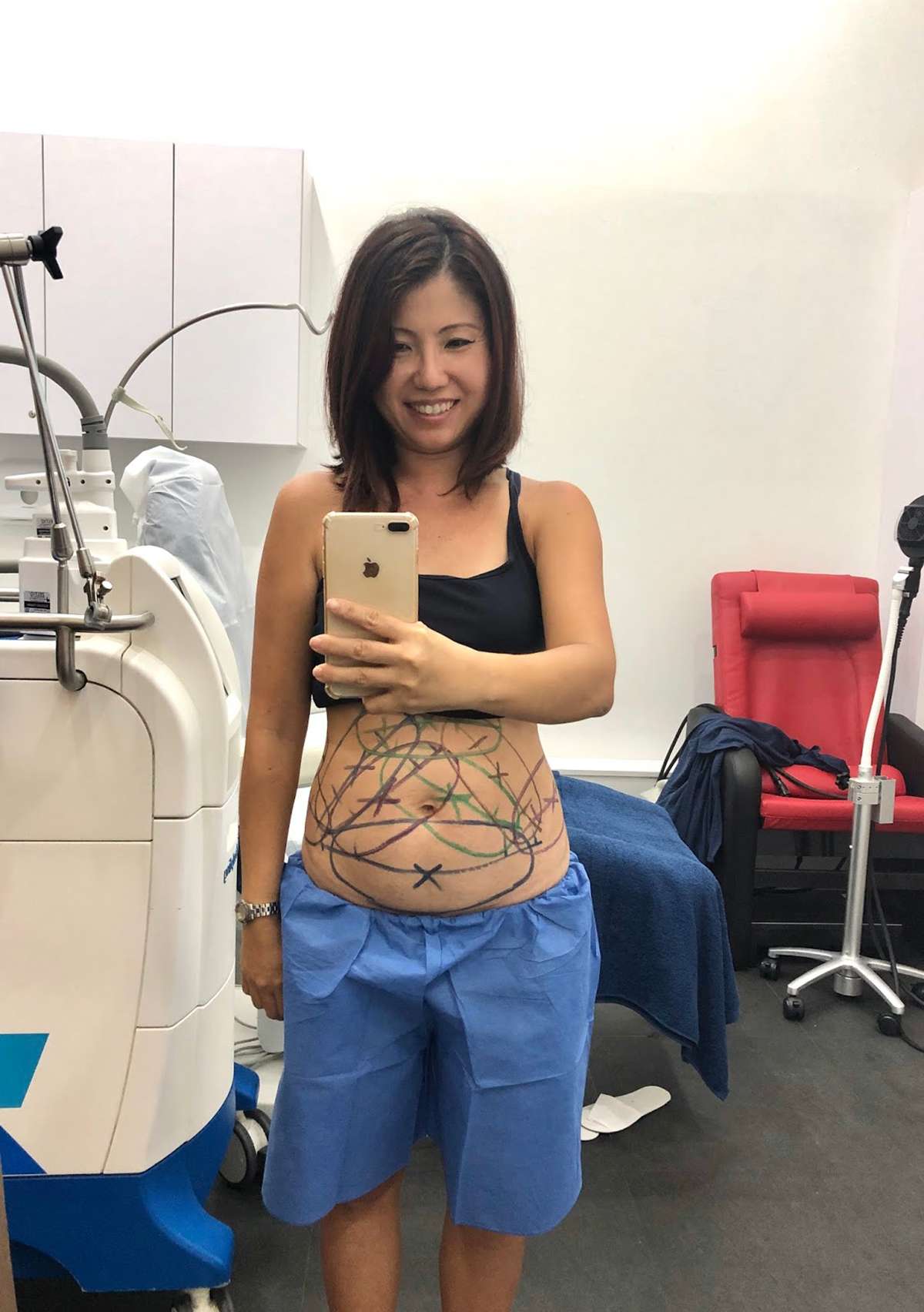 Mandy, the friendly therapist, marked out my areas for treatment as per Dr Terrence Tan’s initial CoolSculpting plan. I looked like I was going for a major liposuction procedure. The markings were done to ensure proper placement of the applicators. The applicators came in various sizes as different surface area required different sizes. I proceeded to lie down on the recliner and was given pillows and blankets to keep me comfortable. Mandy was really friendly and constantly checked if I was feeling alright. 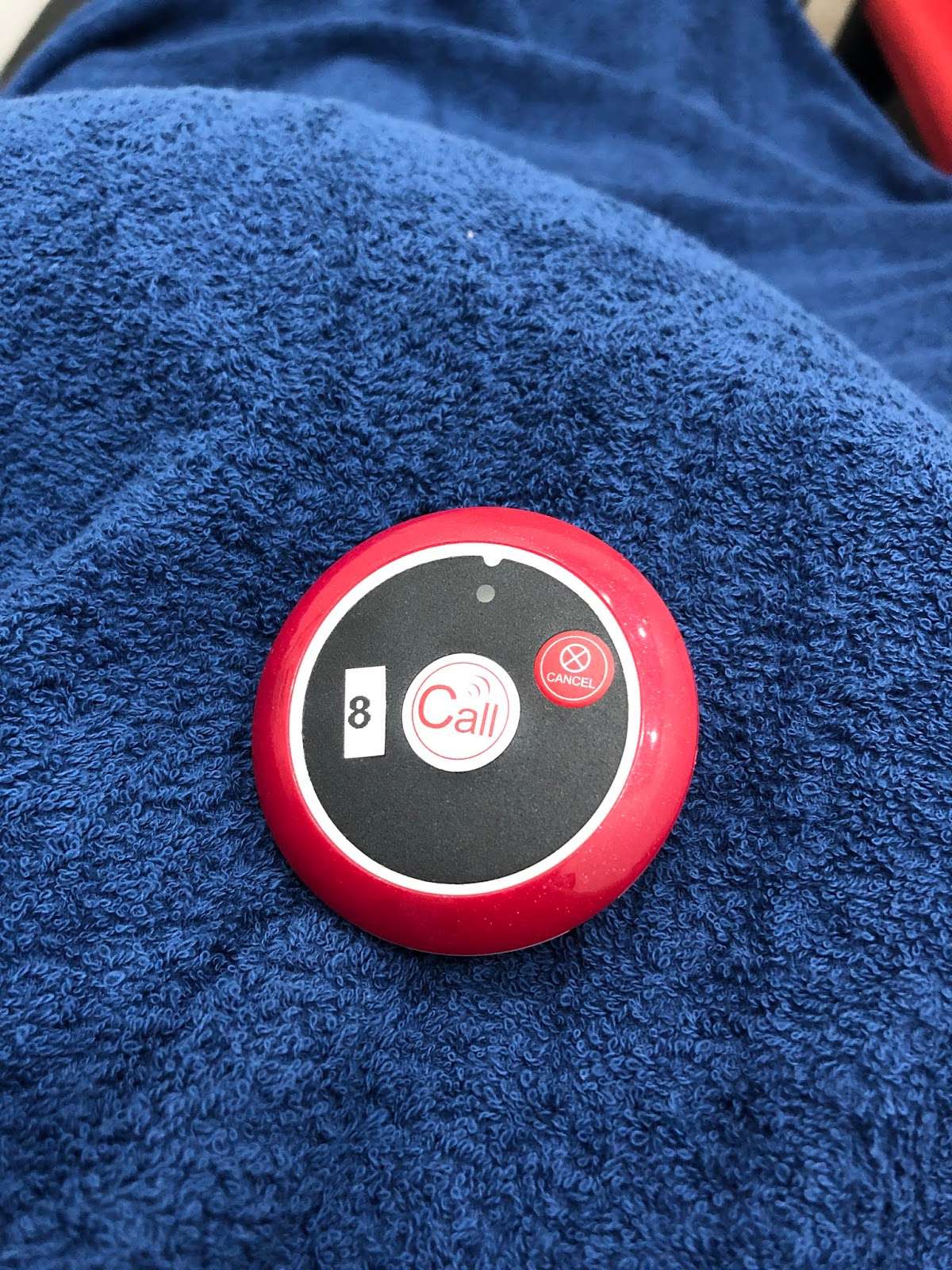 A call bell was given to me in case I needed any assistance during the procedure should the therapist be out of the room.
Step 2: 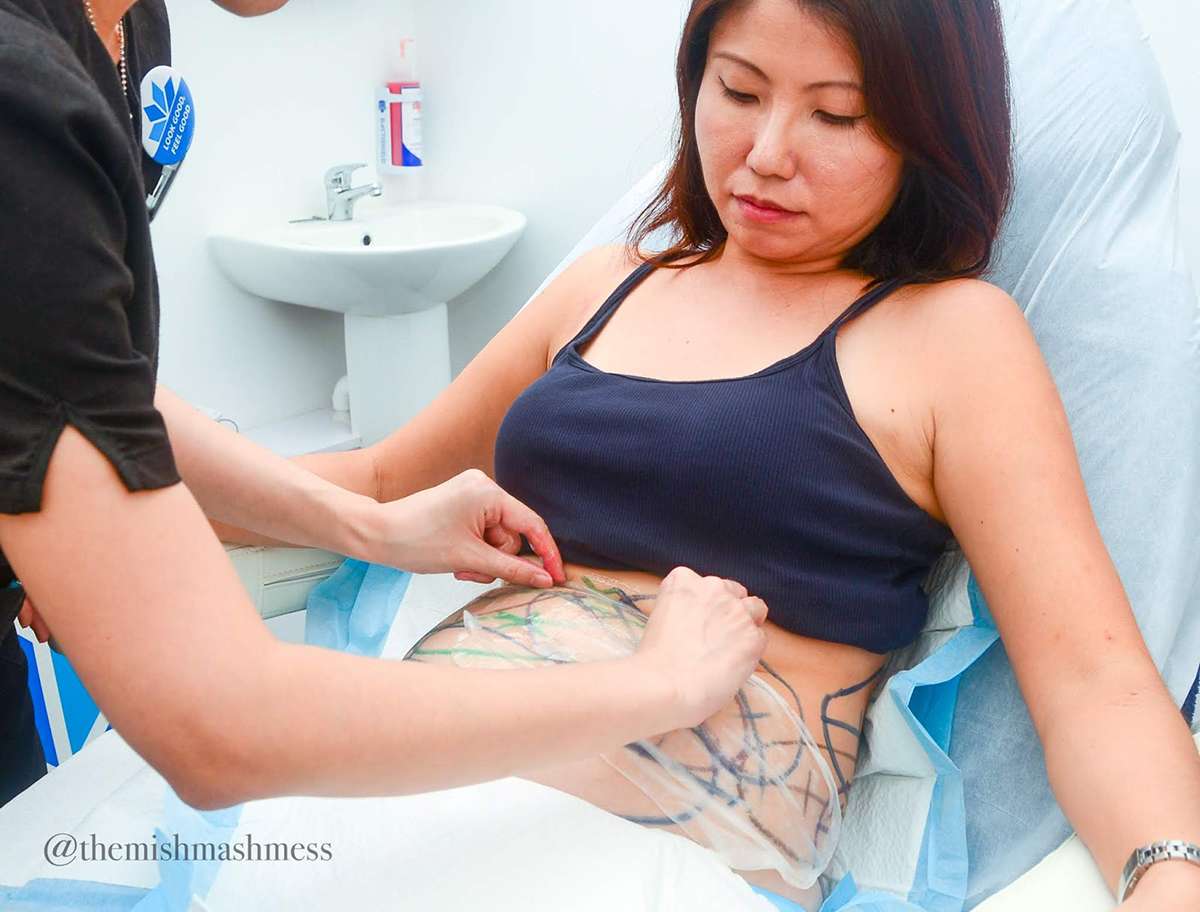 A cooling gel-pad was placed over the area where an applicator was going to be placed. This pad protects the skin during treatment
Step 3: 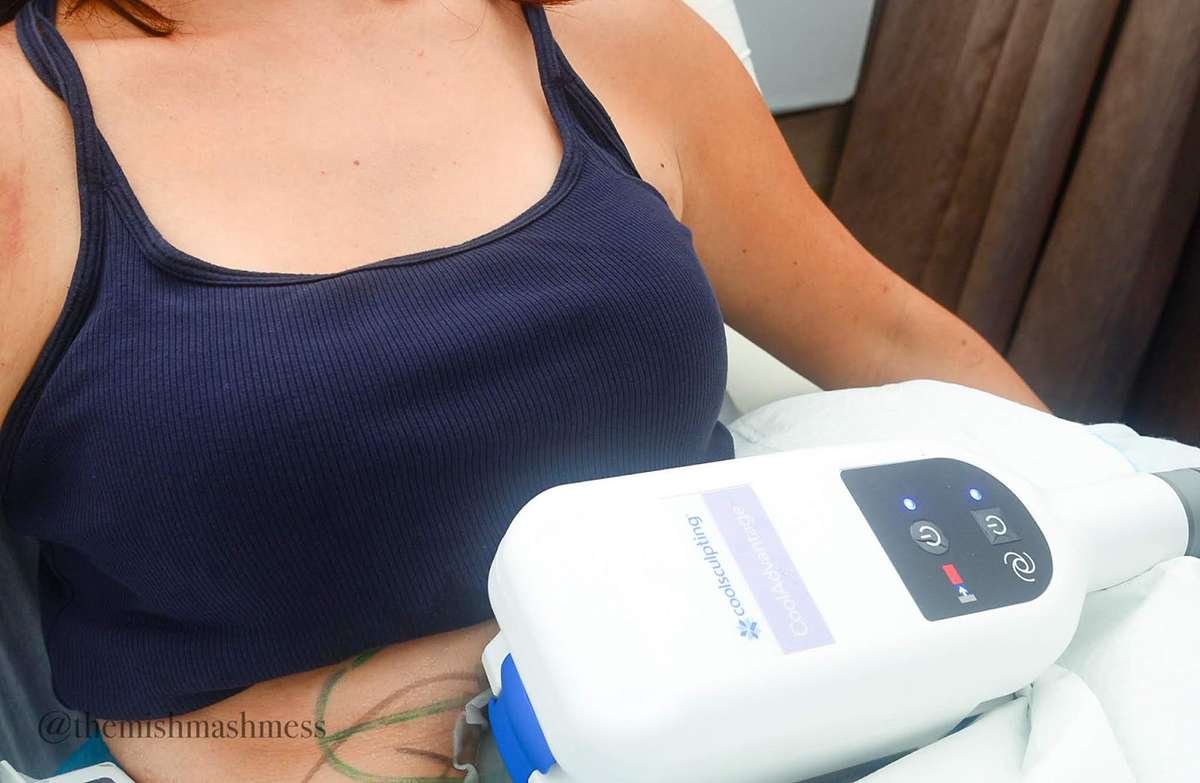 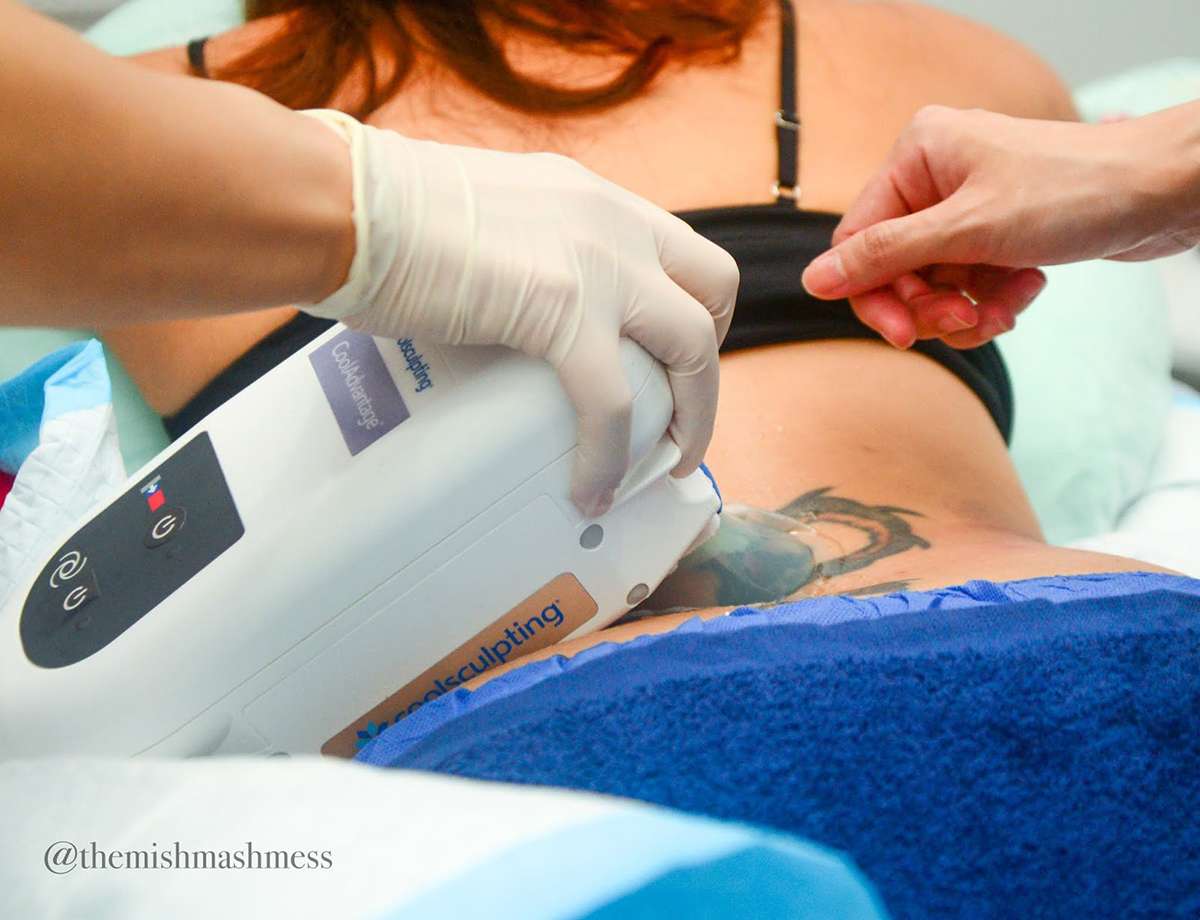 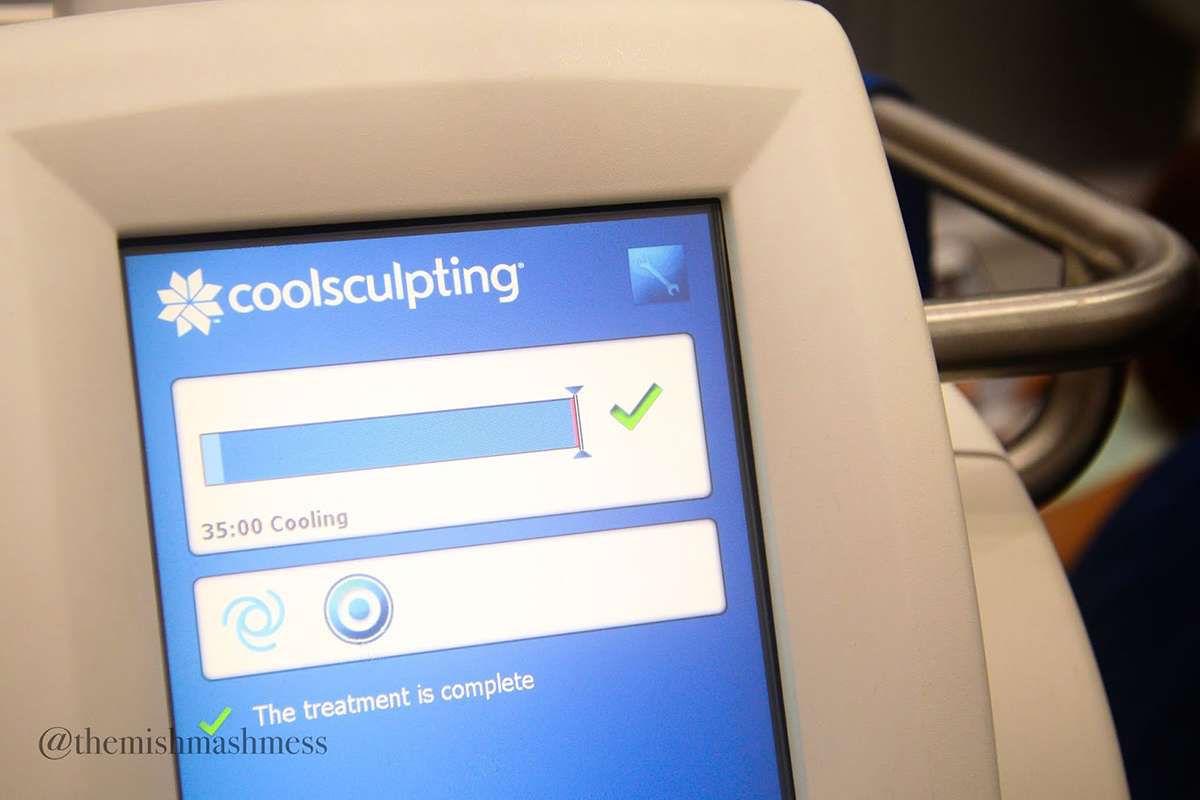 Next, the CoolAdvantage applicator was placed over it. The applicator uses vacuum pressure to draw tissues into the cooling panels. On a scale of 10 for discomfort, I gave this a 0.5. Its tugging wasn’t painful at all and after minutes of application, I could feel the cooling sensation. This subsequently caused that area to be numbed. I even fell asleep on several occasions. When the applicator was removed, the treated area was a little red and raised. Seeing that I was taking it well, Mandy proceeded to use two CoolAdvantage applicators at the same time. 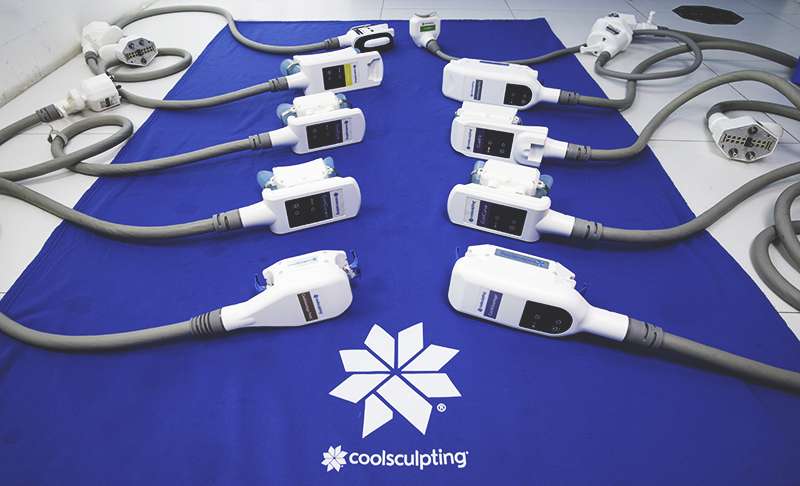 In fact, for time-starved individuals, Halley Body offers QuadSculpting, which is the use of four CoolSculpting machines to treat four areas at one go! This can only be done if the four areas do not overlap. With that, the treatment duration will be four times faster!
Step 4: 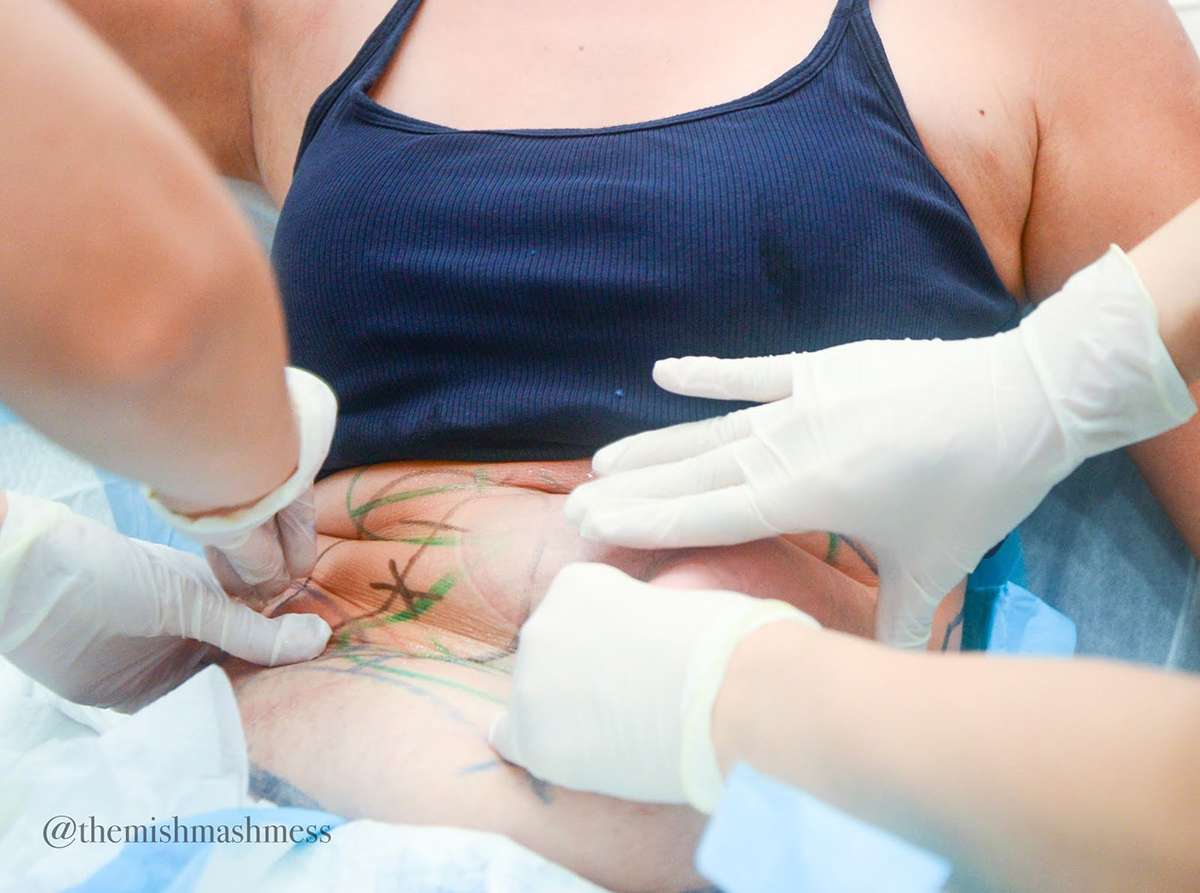 The real deal came when the treated area was massaged. I would be lying if I told you I was as cool as a cucumber. I was not. The massage was not what one would usually get at a spa. On the pain-o-meter, this rated a 4/10 for me. However, this step was crucial to speed up the breakdown of the frozen dead fat cells following CoolSculpting. No pain no gain right? In fact, if one had gone through childbirth, particularly a C-section, this really was insignificant.
The entire procedure took approximately 6 hours for me, with a few toilet breaks in between. I was really enjoying my time on the chair, following up on social media, online shopping, and reading my favourite books. However, midway, I began to feel cold. I was shivering like a leaf and Mandy handed me an extra blanket. This was probably because the central aircon was a little cold. Note to self: to wear socks and probably put on a cropped jacket on my next visit. You would not want to be wearing anything long or covered up because the gel will get transferred to your outfit.
Immediately after the process, I was bruised and there was temporary redness. I was assured that these were normal and will go away with time. I guess this is akin to the traditional Chinese way of using heated glass jars for better blood circulation — Ba Guan. The bruise went away in about 3 days. 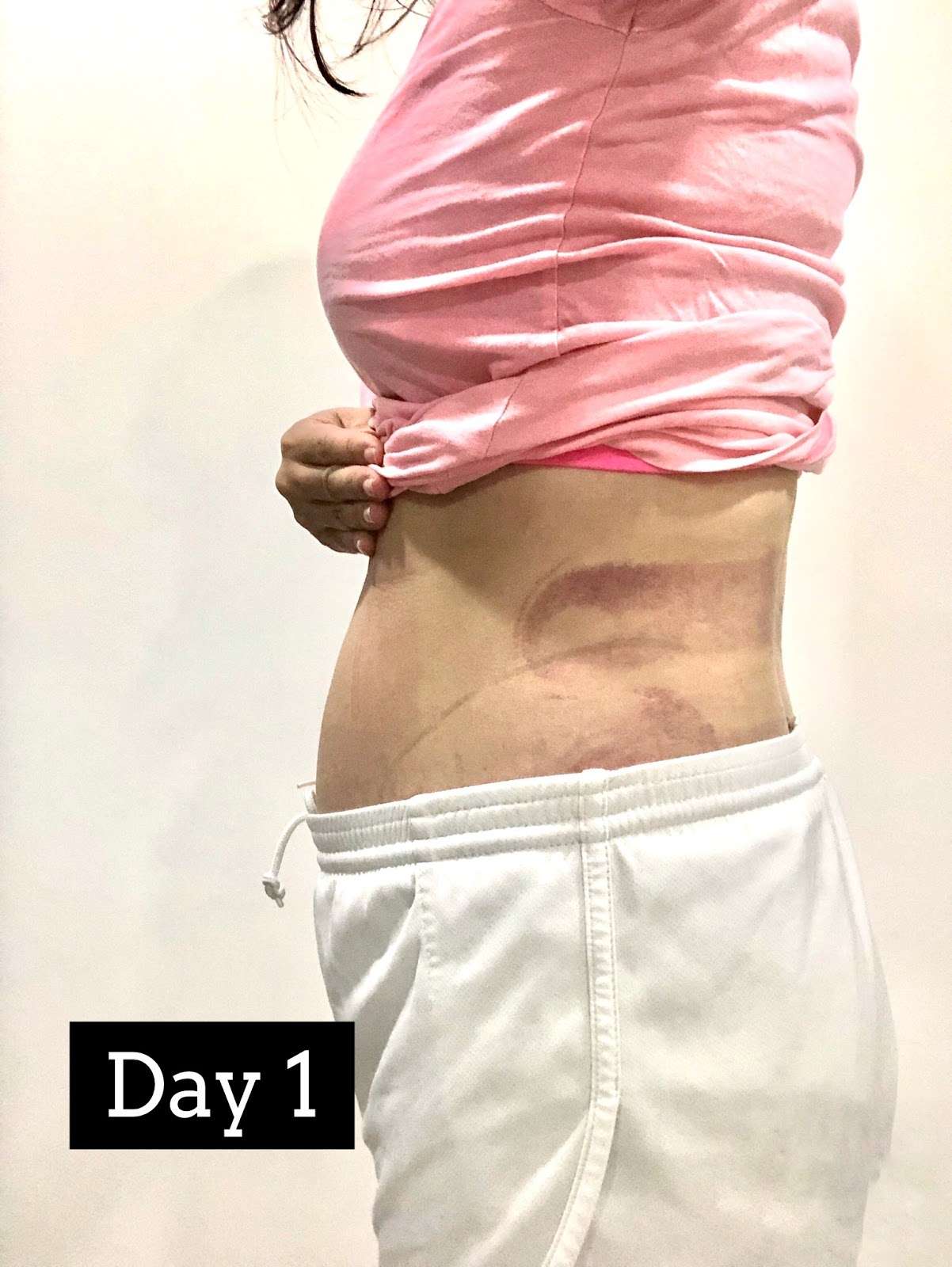 I got up with an ache. This was unlike your typical muscle aches. I touched the treated areas and it felt wobbly and swollen at the same time. It was extremely sensitive and any close contact would see me hitting the person. There was a sensation of fullness and tenderness as I walked and I totally regretted not taking the day off. On the pain-o-meter, it was between 4 and 5/10 on day 1. 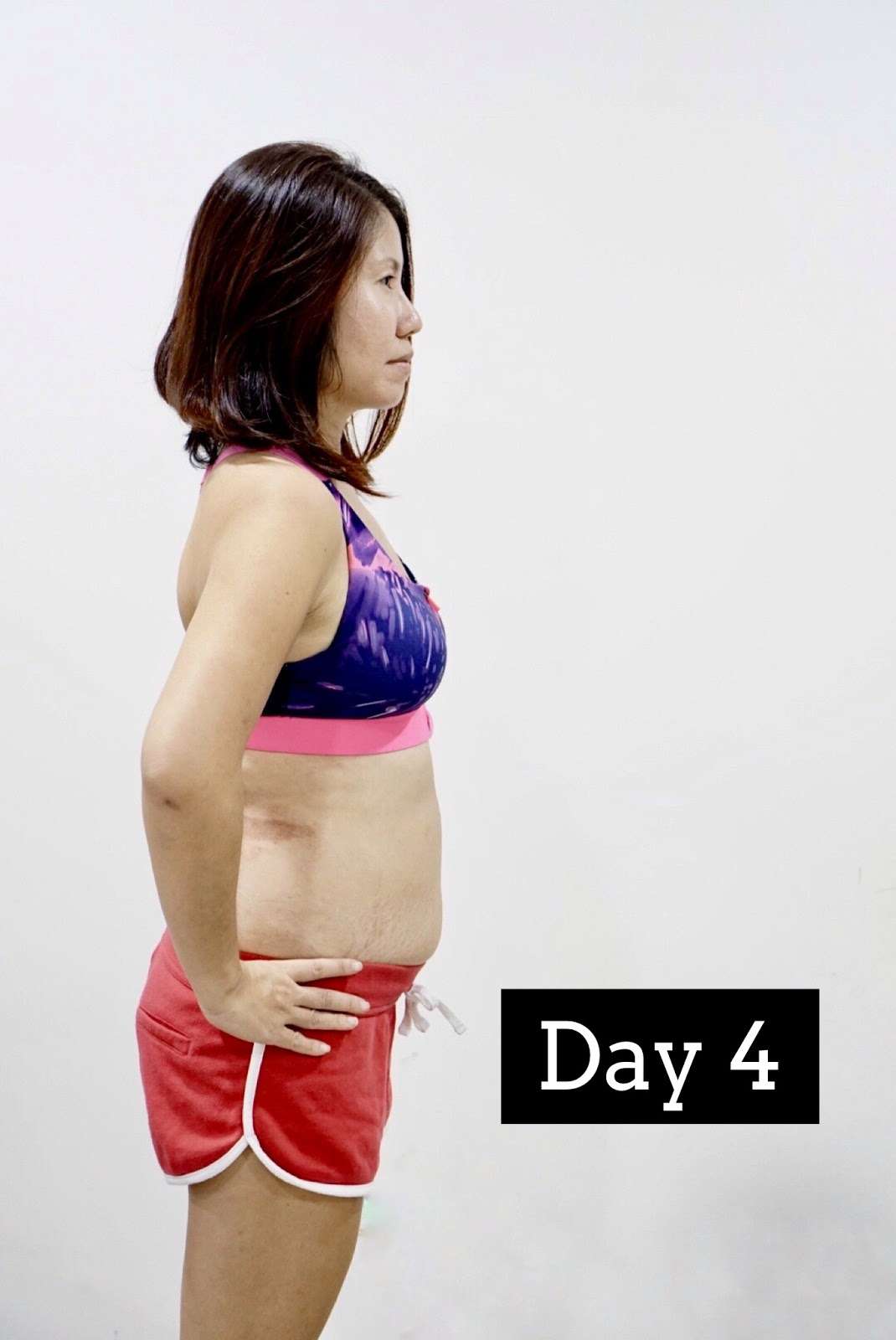 The tingling, sensitive and aching feeling, however, did diminish as the days went by and on approximately day 7, the discomfort reduced significantly. I did, however, felt swollen during this period of time and it felt like I had several fat globules swimming under my skin. These temporary side effects did not hinder my day to day activities.

I was told that it takes about 2 to 3 months for the body to pass the dead fat cells out of the body. Visible results can be seen in a matter of weeks and in fact, I am beginning to feel that my clothes fit better and the bulge got smaller. 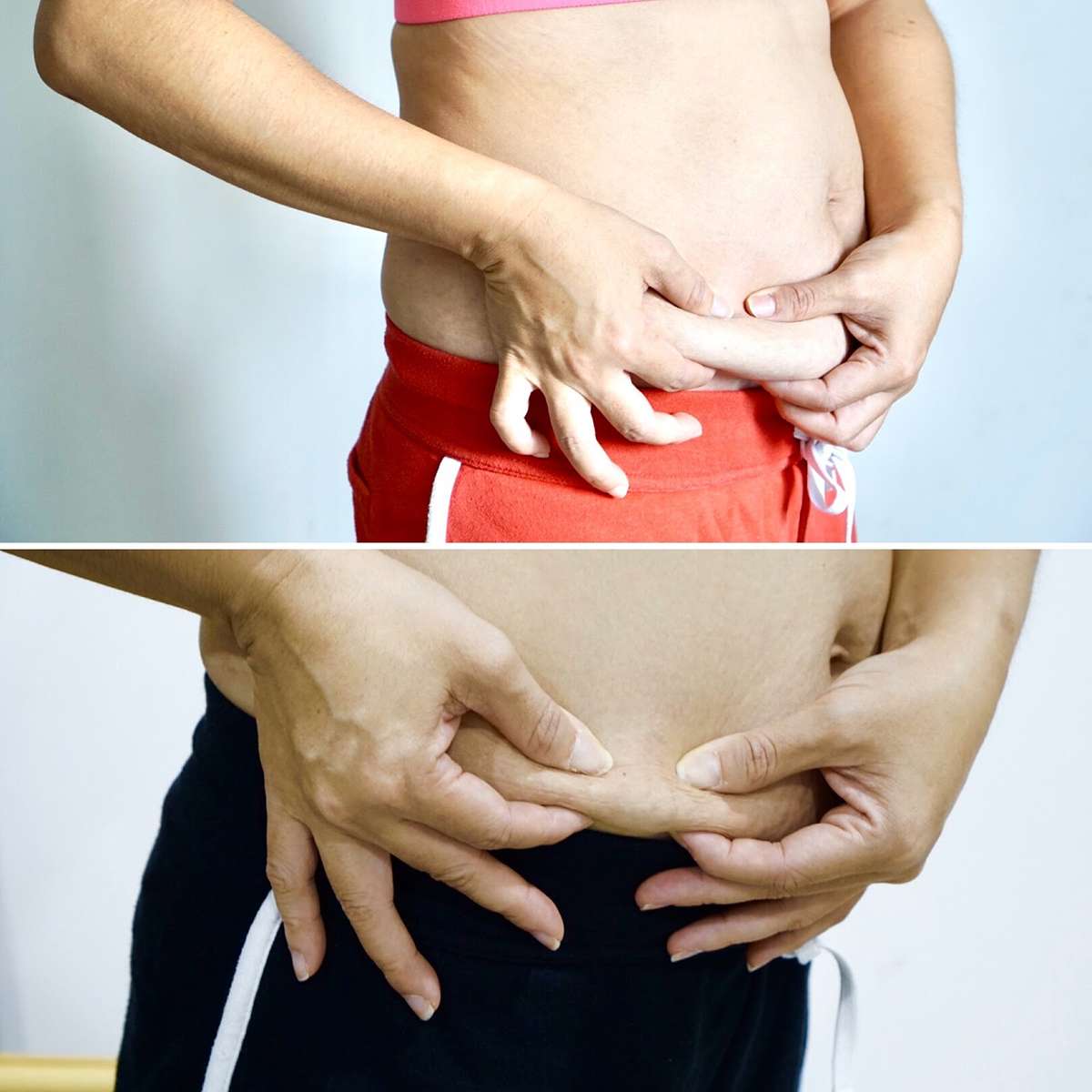 Even the husband commented that I didn’t have much to squeeze. After treatment, your body gradually metabolizes and naturally expels the frozen fat cells. 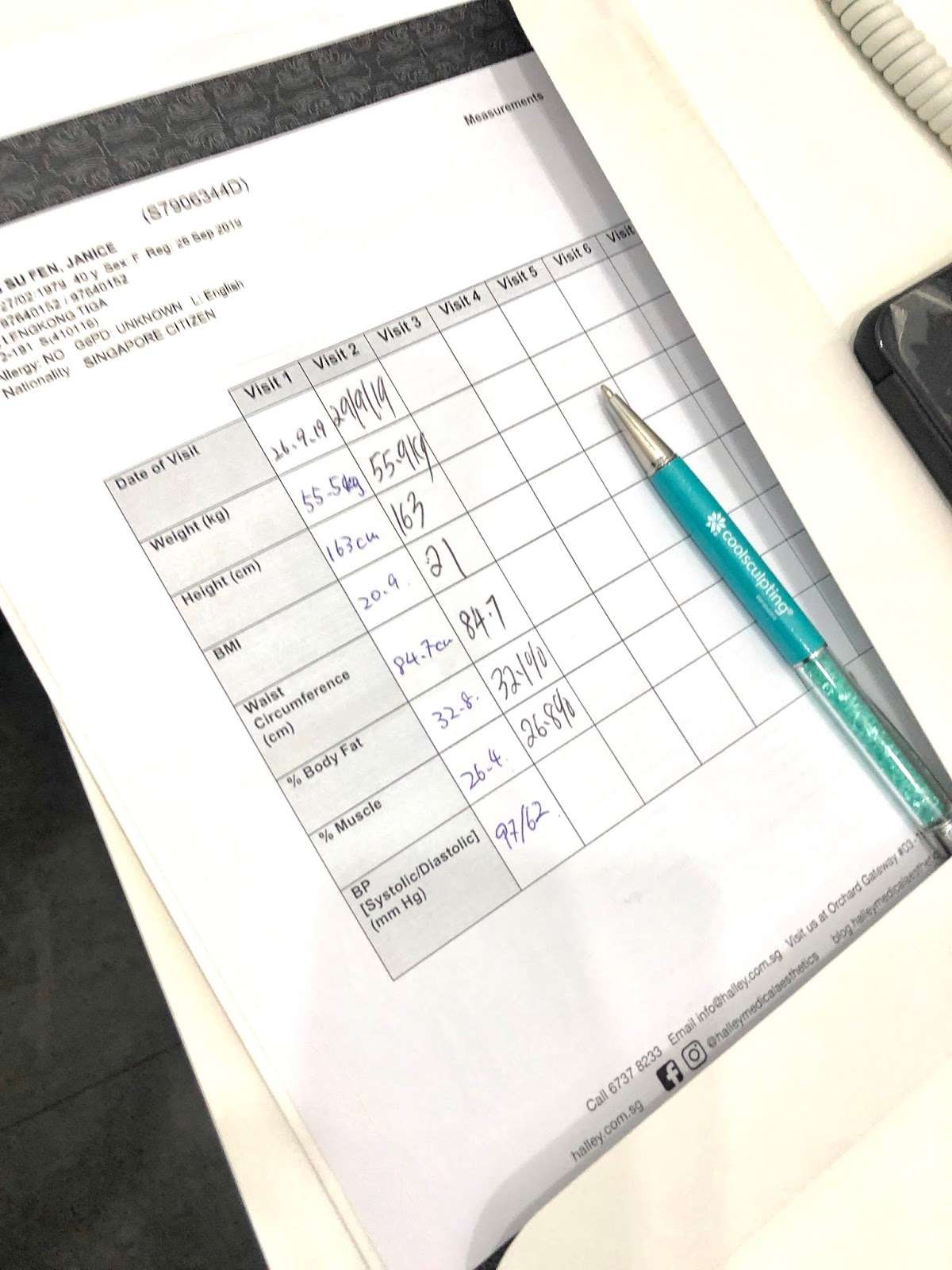 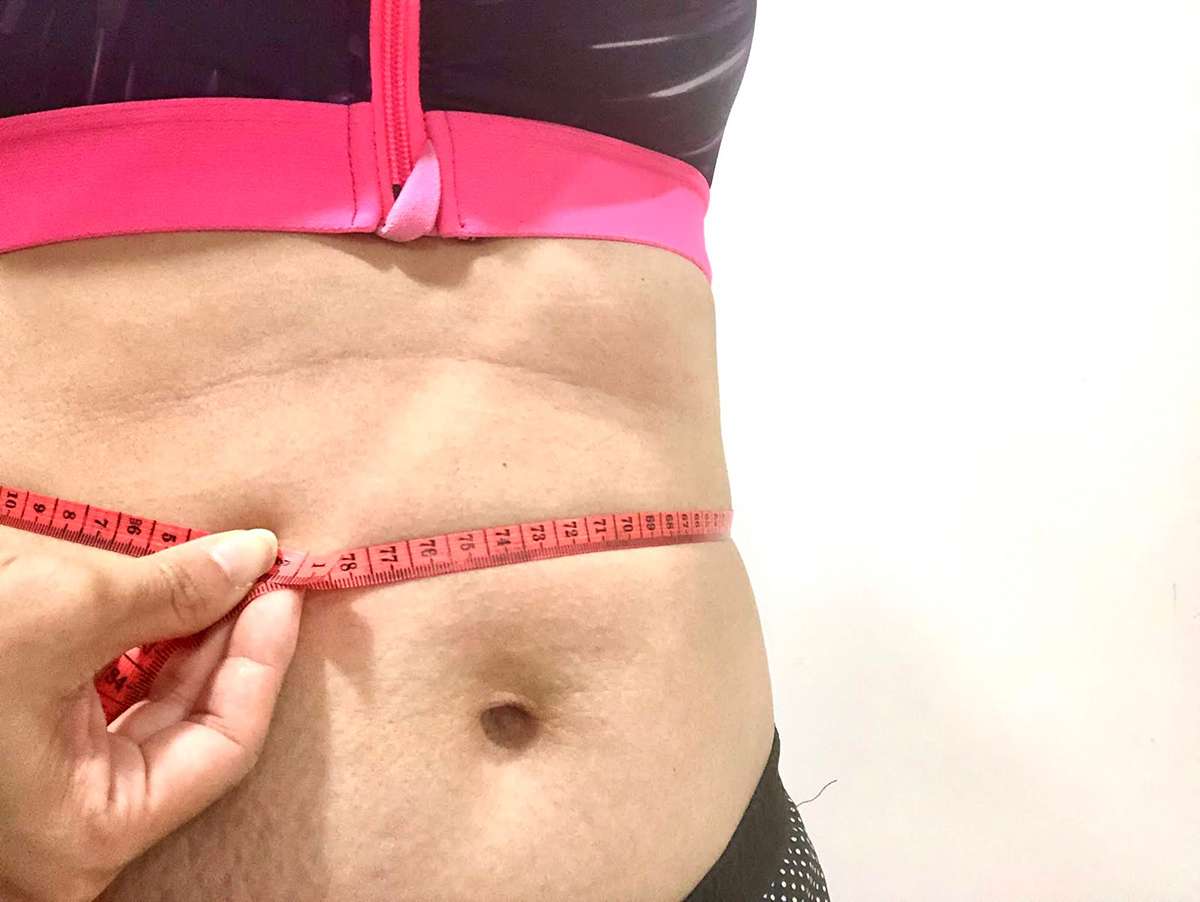 Numbers don’t lie. I measured my girth under my belly button prior to CoolSculpting and it measured 89 cm. Now, it’s 86cm. For the waist area, I am seeing a more significant decrease of approximately 5cm! That’s almost 2 inches! Things have not even peaked yet. In some cases, the final results won’t appear until after 6 months. The remaining fat cells will condense, reducing the fat layer. I am excited! 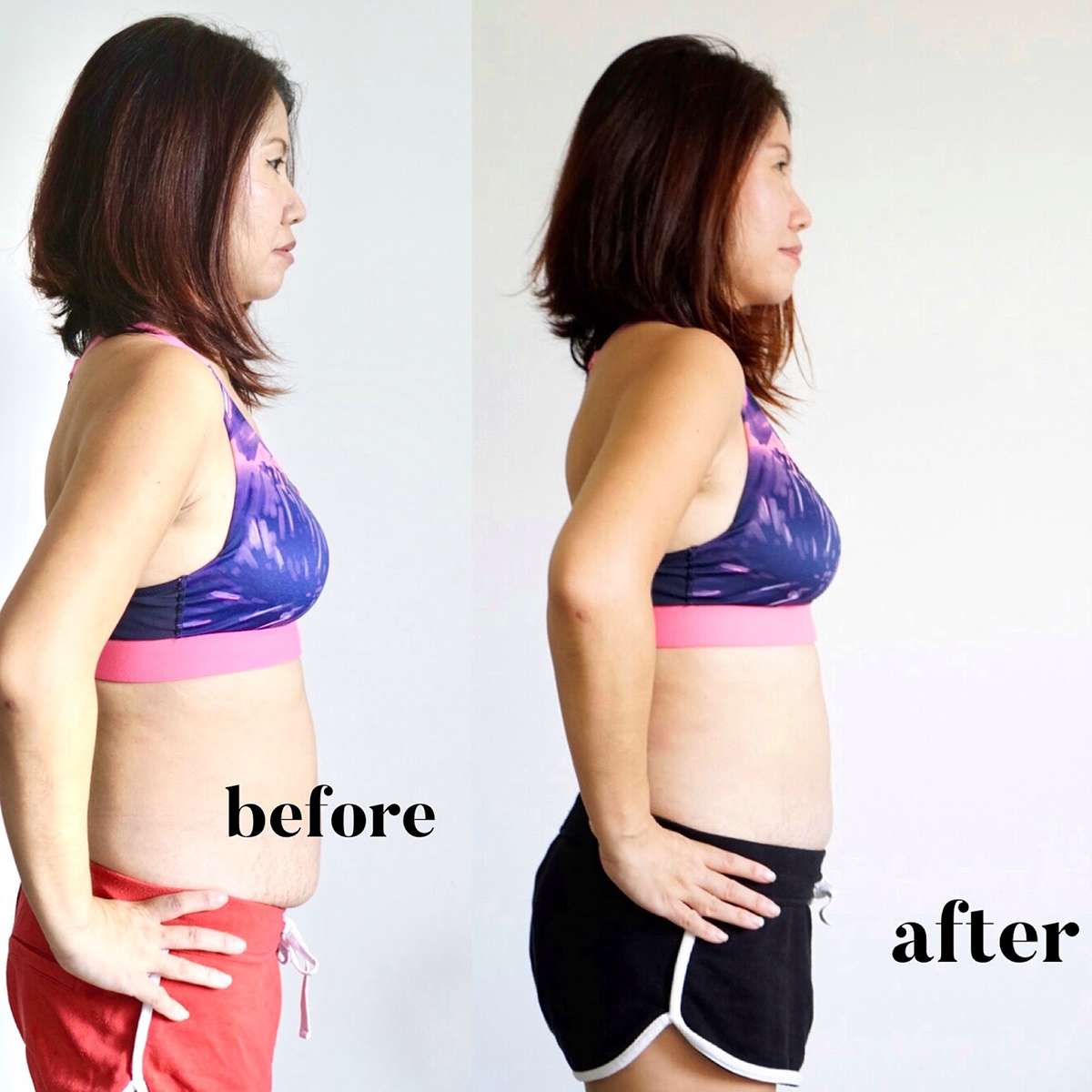 Left: Before /Right: After photo was taken 2 weeks after treatment. 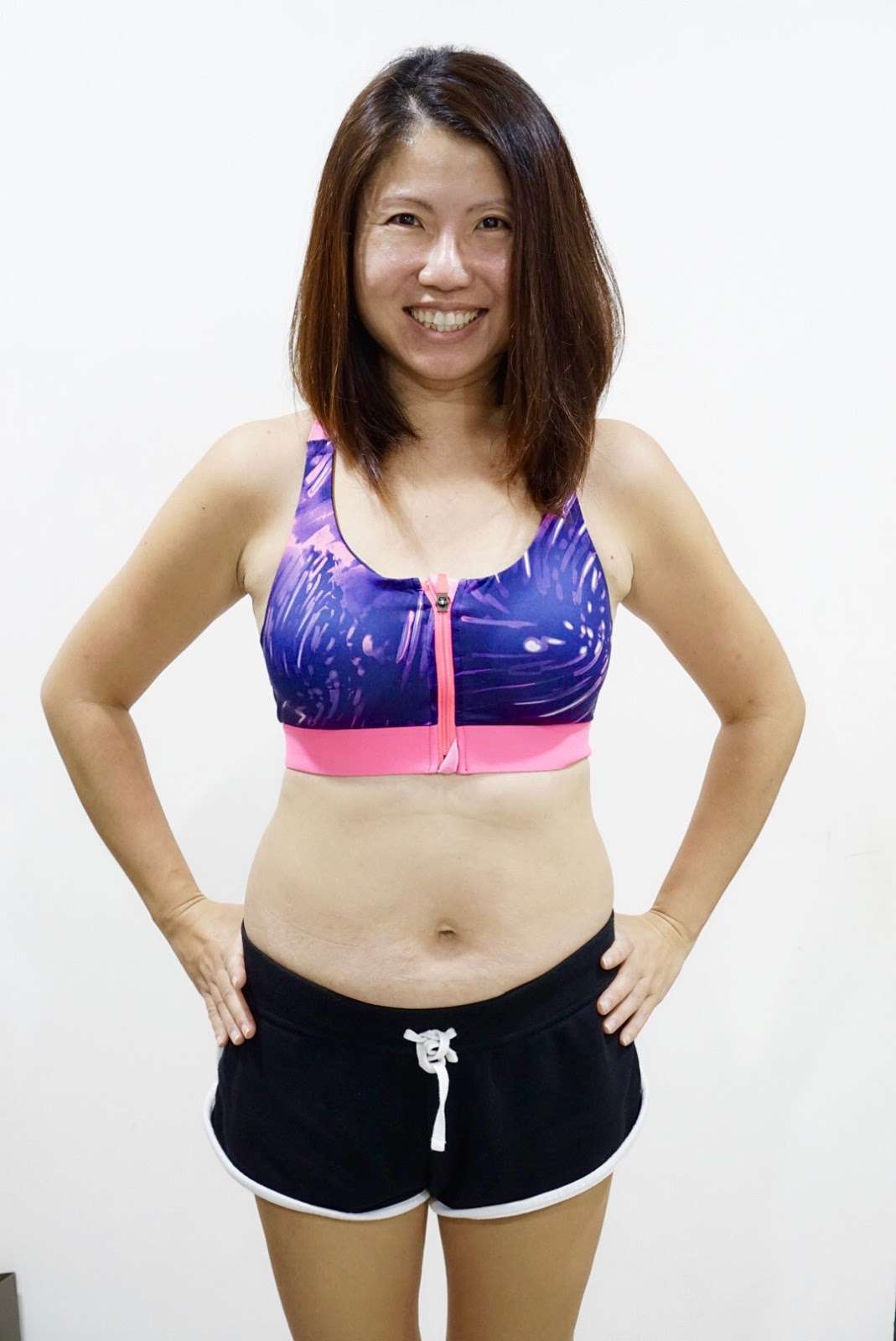 I am very certain that I will achieve a more contoured body with CoolSculpting! With bated breath, I should start carting out bikinis, and book me a beach holiday please!

Cooking Made Easy With Soon Gan Cooking Stock From Korea

Cooking Made Easy With Soon Gan Cooking Stock From Korea