McDonald's, Budweiser and Spongebob Squarepants were just a trio of brands given the post-modern pop fashion treatment by Jeremy Scott in his first collection for Moschino. 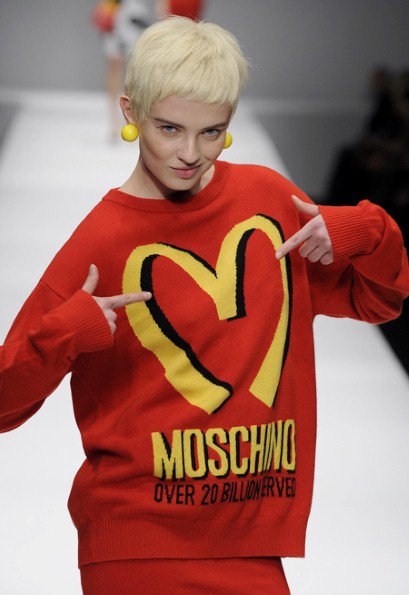 Now Katy Perry knows not to be late to a Milan fashion show. At last night's debut Moschino collection by Jeremy Scott, Perry was the guest of honour - she and the designer go way back.

Finally, just a few moments shy of 9pm and with tangible weariness emanating from the photographers' pit, Perry made her entrance and took her position at the end of the catwalk. Had she not already had a blow-dry the boos that blasted over her would have done the job admirably. With a look of bemusement behind her smile, the singer put up with it for 20 seconds or so then waved regally and took her seat - saying, it looked like, that she'd turned up when she'd been told to.

Ironically enough, the show that had the slowest of starts this season turned out to be a play on fast fashion. Scott rebooted the McDonald's arches and sent out a scarlet and gold pastiche of the world's largest burger chain. A model in a mock McUniform came out with a McNugget box handbag. Another dangled a yellow chained McFries holder bag from the crook of her elbow. There was a shaggy dressing gown with those arches proudly soaring across its shoulders.

McDonald's was not the only brand given the post-modern pop fashion treatment.

In a final section of huge prom gown showstoppers there was a ruffled Hershey's bar dress, a microwaveable popcorn dress, and a flowing gown fit for the queen of the King of Beers. Spongebob Squarepants had his own section - that was an official collaboration - and there was some old-school Moschino black leather and gold hardware worn tight.

Half of the audience for this show will, I suspect, deem it a throwaway travesty. And the other half will have loved it. Personally I thought it was hilarious, and Susie Bubble was swooning about the stuff backstage. Fashion gets so leaden when you take it too seriously.

Instead it should be Anything Goes - just as long as you don't keep the photographers waiting.