Have you ever had any supernatural encounters in your life? Not everyone is sensitive to “the other side” but somehow, I’ve got to experience the existence of the supernatural a few times. I won’t call myself lucky to experience such eerie moments, though!

Listed below few incidents I encountered, and I'm sure some of you might have similar experiences too.

1. Someone called your name

It happened recently when I was staying in a resort alone. I was in the villa when someone called out my name and that voice resembled my colleague's voice and I automatically answered it. When I opened the door, no one was there! Goosebumps!

Well, the legend says that whenever "someone" calls your name, you shouldn't answer because "IT" will follow you!

2. That dark corner at office

Do you instinctively avoid certain corners in the office? And more often than not, it is always a dark corner with minimal lighting and you feel like someone is there watching you?

Yup! That corner must have an "entity". In my case, it was already confirmed by a colleague who can see the spirits, and apparently, that dark corner is where the scariest entity of the office stays.

This happen to me when I was having my massage at the spa overseas. The soft music was playing and all of a sudden, I heard waves of laughter (if you know Pontianak laughs). At first was very soft and I thought that it was part of the music. But, it became louder and it was very clear that the laughter wasn’t part of the music at all. I was stoned, and I was so scared that I couldn't move or talk. I was trying to tell masseur but no voice came out. When the massage ended, I quickly dressed up and left the spa.

Regardless of whether I'm at home or in the office, I always feel or see shadows by the corner of my eyes. But the moment I turn around to check what's there, there is always nothing. I guess this is very common and I'm guessing that it might just be entities passing by. I'm sure I'm not alone in this!

Have you ever stiffened up in the middle of your sleep and couldn't even move a finger? You want to wake up but you just can't seem to move. Even when you tried to scream, no voice comes out from your mouth.

The legend says that there is possibly a spirit trying to enter your body. Other theory said it’s just a dream. It’s up to you to believe!

Somehow I find that the black cat population increases during the ghost month based on my observations.

I’ve ever got chased by a black cat when I was passing by a HDB block on my way back home. The black cat seemed very angry and was trying to land its paws on my legs. I quickly ran until it disappeared. What a strange experience! 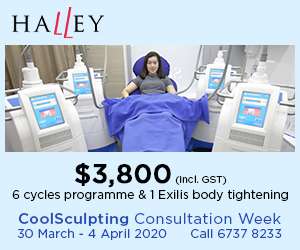 5 Ways to Celebrate Halloween in the Office
Career10 Oct '17